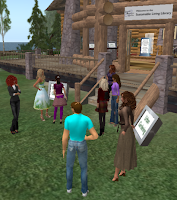 Got in to work a little before 9:00am. Normally, I would open up my email first thing in the morning, but today, CAL was holding a training session for SecondLife. We met at the Sustainable Living Library. Even though I am not a member of CAL, they attendees welcomed me to the session. I used to use SecondLife when I first discovered it about three years ago, but I haven't used it lately. I also knew that they changed their interface, so I wanted to put it through its paces. The new interface is ok, but I was experiencing some severe time lag issues. Once I teleported to a different island, then my performance got better. In any case, I had a good time chatting with several other Colorado librarians.

Once I was done with that, then I got my chance to look over the email that accumulated over the weekend. I had 27 messages in my main inbox, 69 items had gathered in various filter folders based on certain topics or projects. I also had 25 that were listed in the junk folder. One of the items in a filtered folder was from the Library Journal Academic Newswire. There was an article about a new JISC report concerning Generation Y researchers. I found it interesting, so I put it into my delicious account.

That reminded me that I wanted to put in something else into delicious. One of my colleagues wrote an article concerning collaborative collection development. At the end of the day, I ended up tagging 5 things.

I have some saved searches in Google Scholar. One is for "Information Seeking" and the other covers the topic of collaboration and libraries. I usually get about 3-5 items on both topics every couple of days. I was going to blog about a new article concerning collaboration in libraries (for Collaborative Librarianship News), but then I saw that the article actually came out about 12 years ago -- not exactly new news.

I sent an email to a discussion list for LIS students at the University of Denver concerning #LibDay5. I hope some of them will be able to use some of the insights from the various librarians participating in this project.

I also responded to emails concerning Morgan & Claypool and an article in an obscure chemistry journal.

I was at the Research Desk (formerly called the Reference Desk) from 1-3pm today. Normally, we have graduate students work the desk during the summer, but we needed to have some time slots filled, and I was happy to cover for a couple of hours.

I got some questions concerning:
During down times at the desk, I continued a discussion concerning social media and social networking tools with Walt Crawford, so I read up on his blog, Cites and Insights to get the inside scoop on his opinion.

I became of friend of Gulliver the Turtle -- he is the mascot for the Open Access publisher BioMedCentral.

I also read other documents to get ready for an SLA Sci-Tech Division Leadership Webinar meeting the following day.

Once I got home from work, then we finished painting Mr. 10's bedroom. The weekend project turned into three days worth of work, but the room looks pretty good.

I have also been wanting to try to load Linux on an old laptop (Over 7 years old) that we have, but Ubuntu isn't working out for me. It isn't loading from the flash drive, even though I changed the BIOS settings. I also tried to install with a CD-ROM, but it was taking way too long. I will give Puppy Linux a try the following day. I have read some reviews that it works very well on old machines with small amounts of RAM. The laptop has 512MB, so that should be more than enough. I will let you all know how that works out.
Labels: libday5, librarydayinthelife
Posted by Joseph Kraus at 3:40 PM